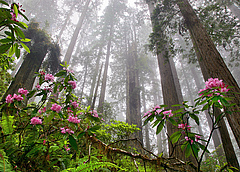 Coast redwoods (Sequoia sempervirens) can be up to 115 meters high, and reach up to seven meters in diameter. These evergreen conifers are the highest trees on earth. Photo: Save The Redwoods League

Berkeley/Leipzig. Climate change might shift the climatic suitable habitat of coast redwoods in California about 70 to 200 kilometers to the north in the near future. The environmental conditions that support  the famous tallest trees in the world will move north of San Francisco. This is the result of a study by the University of California and the German Centre for Integrative Biodiversity Research (iDiv) Halle-Jena-Leipzig. They analyzed historic climate data in order to make more accurate ecological predictions possible from global climate models. This approach is particularly suitable for regions where the local climate is strongly influenced by the ocean and therefore falls within the global climate models through the cracks, write the researchers in the journal Global Change Biology. Global climate models often show the projected changes only very roughly and overlooking local effects. However, these are very important for predicting how individual animal or plant species will cope with climate change. The international team was looking hence for an alternative approach, and took historical climate data as indicators of short and medium term changes in climate. For this purpose, they evaluated the mean annual temperature and annual precipitation of 195 stations in California 1895-2010. Then they compared the scenarios from the historical records with the projections of global climate models and put it into a distribution model for the endangered coastal redwoods. Depending on the scenario, the range of the distinctive tree with the red wood will change significantly. Would it drier and warmer in California, the redwood forests could shrink by now around 19,000 square kilometers to less than 5,000. Would it wetter and colder, then these forests on the other hand could extend even to almost 25,000 square kilometers. "However, most likely will be in 2025 a scenario in which it will be warmer in California, but the precipitation will not change dramatically. Then the distribution area of ​​the coastal redwoods will move an average of about 70 kilometers to the north," says Dr. Miguel Fernández from iDiv. In the south, the species would thus lose about 50 percent of its territory and would south of San Francisco Bay completely disappear. On the other hand in the north they could win about 34 percent of area that would be suitable on the climatic conditions in the state of Oregon. A large resettlement program would probably be needed to ensure that coastal redwoods could also take advantage of the new habitat in the north of the US west coast to form larger forests there. Because often the natural spread of animal or plant species cannot keep up with the pace of climate change. But there is also a good news in spite of uncertainty: Even in the most extreme climate scenarios there will be still a stable refuge in the near future - the forests of the Redwood National Park near Eureka. “Coast redwoods have endured millennia of climate change in the past and so have remarkable resilience to tolerate fluctuations in the weather," Miguel Fernández looks back. "Our study shows that historical climate variability offers an untapped resource to develop robust climate scenario with high resolution and dynamic responses to the global climate change. Thus, they are a viable alternative to the projections of global climate models -especially for short-term forecasts.“ Coast redwoods (Sequoia sempervirens) can be up to 115 meters high, and reach up to seven meters in diameter. These evergreen conifers are the highest trees on earth. They grow only in a narrow strip on the Pacific coast of the United States because they are typical inhabitants of the rainforests in temperate latitudes and thus rely on a mild and humid climate. Because of its imposing appearance, the species has a high symbolic value and became the State Tree of the U.S. states of California. The wood of the coast redwood is one of the most valuable timbers worldwide because of its high quality and longevity. Due to the strong commercial use these forests are significantly shrunk in California since the mid of 19th century. Today, about ten percent of the original area are under protection. Tilo Arnhold Original publication:
Fernández, M., Hamilton, H. H. and Kueppers, L. M. (2015), Back to the future: using historical climate variation to project near-term shifts in habitat suitable for coast redwood. Glob Change Biol. doi:10.1111/gcb.13027 http://dx.doi.org/10.1111/gcb.13027The study was founded by the Save the Redwoods League.

Redwoods (National Geographic, October 2009): http://ngm.nationalgeographic.com/redwoods/redwoods A short film about the Coastal Redwoods of California: https://www.youtube.com/watch?v=UCk6r_9ktr4 Save the Redwoods League: http://www.savetheredwoods.org/ NatureServe Network: http://www.natureserve.org/About Save the Redwoods League Since 1918, Save the Redwoods League has led the effort to protect coast redwoods and giant sequoias for all to experience and enjoy. To date, the League has protected more than 200,000 acres of redwood forest and associated land from southern Oregon to the Big Sur coastline of central California. As part of that effort, the organization has created and expanded 66 redwood parks and preserves that inspire visitors from around the world. http://www.SaveTheRedwoods.orgAbout German Centre for Integrative Biodiversity Research (iDiv) iDiv is a central facility of the University of Leipzig within the meaning of Section 92 (1) of the Act on Academic Freedom in Higher Education in Saxony (Sächsisches Hoch-schulfreiheitsgesetz, SächsHSFG). It is run together with the Martin Luther University Halle-Wittenberg and the Friedrich Schiller University Jena, as well as in cooperation with the Helmholtz Centre for Environmental Research – UFZ. The following non-university research institutions are involved as cooperation partners: the Helmholtz Centre for Environmental Research – UFZ, the Max Planck Institute for Biogeochemistry (MPI BGC), the Max Planck Institute for Chemical Ecology (MPI CE), the Max Planck Institute for Evolutionary Anthropology (MPI EVA), the Leibniz Institute DSMZ–German Collection of Micro¬organisms and Cell Cultures, the Leibniz Institute of Plant Biochemistry (IPB), the Leibniz Institute of Plant Genetics and Crop Plant Research (IPK) and the Leibniz Institute Senckenberg Museum of Natural History Görlitz (SMNG). http://www.idiv.de
« back to Biodiversity Conservation
Share this site on: