MIE scores a publication hattrick in Frontiers in Plant Sciences 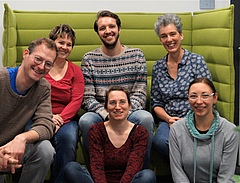 Over the last weeks, several MIE members got the good news that their papers would be accepted in the Open Access Journal “Frontiers in Plant Science”. Rebekka Sontowski and Axel Touw each published a paper as first authors on the chemical and molecular interactions between cabbage root fly and Brassica plants.  Anne Mädicke supported the gene expression analyses, and former lab members Nicola Gorringe, Arletys Verdecia Mogena, Stefanie Pencs and Tomonori Tsunoda were also involved. In addition, Katharina Grosser, Andreas Schedl and Nicole van Dam also served as co-authors in a paper from the Jacqueline Bede lab at McGill University, Montreal, Canada. Nice score MIE!

Links to the papers: