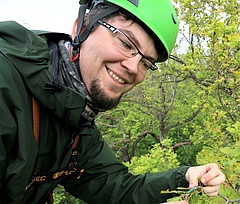 iDiv postdoctoral researcher Martin Volf received an Alexander von Humboldt Return Fellowship to continue his research on chemical defence mechanisms of trees against herbivorous insects. Volf has been a Humboldt Research Fellow and postdoctoral researcher in the iDiv research group Molecular Interaction Ecology (MIE) for the last two years. In particular, he studied the localized induction of volatiles and other defences in trees, their impact on predation and the cascading effects on insect herbivores. His current project with the MIE group ends in October. He will then start a new position at the Czech Academy of Sciences to investigate evolutionary aspects of the insect-plant arms race and the genesis of plant chemical diversity. The Alexander von Humboldt Return Fellowship will allow him to continue his collaboration with iDiv.