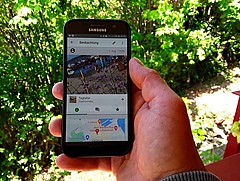 In an increasingly human-modified world, biodiversity data are essential to the detection and understanding of local to global biodiversity change [1]. Biodiversity monitoring is targeted in the draft post-2020 global biodiversity framework of the Convention on Biological Diversity, recognizing that up-to-date knowledge is needed to guide decision making. In recent decades, there has been a massive increase in available biodiversity data — there are currently >2.1 billion species occurrence records in the Global Biodiversity Information Facility, representing a 12-fold increase since 2007 [2]. This rise in biodiversity data is due in part to the growing popularity of citizen, or community-based, science.

One of the most globally successful platforms is iNaturalist, a multi-taxa platform and joint initiative of the California Academy of Sciences and the National Geographic Society. iNaturalist allows participants to contribute observations of any organism (e.g., Figure 1), or traces thereof, along with associated spatiotemporal metadata. Observations are then identified and verified to high taxonomic resolution by the iNaturalist community, in conjunction with the rapidly improving computer vision suggestions. An observation is deemed ‘Research Grade’ when it meets the site’s metadata quality criteria, and has two or more suggested identifications, more than two-thirds of which agree at a species level (i.e., 2/2, 2/3, 3/4, etc.; although records identified to a level finer than family can also become Research Grade if no further progress in identification is deemed possible). While the quantity of data and contributors continue to increase on iNaturalist, one bottleneck to fully realizing the potential of these data for scientific research is the dearth of participants with reasonable expertise (i.e., someone with the skills and ability to make informed identifications) — hereafter ‘identifiers’ — actively participating in the community. The iNaturalist community — as of January 2022 — consists of 2.5 million users, 92% of whom only observe, <1% of whom have only made identifications, and 7% of whom both observe and identify. More recruitment of identifiers is clearly needed.

Seven reasons to contribute to iNaturalist as an identifier

1. Your contributions increase knowledge of biodiversity

• When you add an identification to an observation, it can immediately increase the value of that record by advancing the taxonomic level to which that observation is identified

• Identification efforts can be prioritized for maximum knowledge increase (e.g., by identifying species in undersampled regions of the world, targeting specific taxonomic groups that are threatened, or focusing on regions of the world with high endemism)

2. The value of opportunistic records is increasing

• As a result of rapidly increasing statistical advances and data integration approaches with structured sampling, each identified record can advance our understanding of species distributions and abundance trajectories

• Photographs from iNaturalist are increasingly used in many unique and novel secondary ways, often opportunistic in nature

3. You can contribute data on threatened, data-deficient, or invasive species

• Since its inception, iNaturalist users have documented many significant records, including the rediscovery of species thought to be extinct or locally extirpated, considerable range extensions and new national records, previously undocumented behaviors and host associations, and even the discovery and subsequent descriptions of new species

4. iNaturalist is a ready-made, free, and easy-to-use data-collection infrastructure

• A computer or smartphone and an internet connection are the only requirements for using iNaturalist, with all aspects of the platform, including uploading, identifying, and downloading data, entirely free

• iNaturalist features a dedicated ‘Identify’ tool that is streamlined for a rapid workflow to make, and review, identifications quickly

5. You can partake in dynamic, real-time interactions around the world

• Engaging with iNaturalist prompts you to discuss and collaborate with all types of users in real time, with benefits for everyone involved

6. You can engage with a broader audience

• iNaturalist offers an efficient and powerful mechanism for broader societal impact, since identifiers can engage with thousands of individuals around the world, helping to connect people with the ecosystems of which they are a part

7. You can enjoy yourself

• Browsing photographs of even well-known species, and helping new naturalists to identify them, can be enjoyable and personally rewarding

How identifications can contribute to biodiversity research

In addition to the use of opportunistic records to quantify biodiversity in space or time, photographs from iNaturalist are also being used in many unique and novel secondary ways, often opportunistic in nature. For example, opportunistic records have been used to study timing of winter coat molt in mountain goats [4]. The usability of a photograph for these purposes is most valuable when the observation has been identified to the finest possible taxonomic resolution, something that increasing the number of expert identifiers can help achieve. Identifiers can further add value to observations with iNaturalist annotations (e.g., Plant Phenology=Flowering), observation fields (e.g., Host Species), and adding observations to projects (e.g., bees concentrating on nectar; [5]).

Since its inception, iNaturalist users have documented many significant records, including the rediscovery of species thought to be extinct or locally extirpated (e.g., [6]) considerable range extensions and new national records (e.g., [7]), and previously undocumented behaviors and host associations (e.g., [8]). Observations uploaded to the project Australasian Fishes have contributed more than 600 novel findings of undescribed species, range extensions, and undocumented behaviors and species interactions (e.g., [9]), whilst the project First Known Photographs of Living Specimens has more than 3600 records representing the first, and often only, photographic records of those taxa [10]. Novel observations identified promptly can be especially important from a biosecurity perspective. Citizen science can enable the early detection of invasive species [11], and indeed there are an increasing number of records of invasive species having been first detected via iNaturalist. On 31 July 2020, a photograph of feeding damage on an elm leaf (Ulmus sp.) was uploaded to iNaturalist by user Alain Hogue (@alainhogue). Within eight hours, Charley Eiseman (@ceiseman), a North American expert in leaf mining and other herbivorous insect tracks and signs, suggested the observation may represent the first North American record for the Elm Zig-zag Sawfly (Aproceros leucopoda), an invasive pest species outside its native range in eastern Asia. The observation sparked on-site visits by the Canadian Food Inspection Agency and Canadian Forest Services, where specimens were collected, and additional searches of Ulmus observations from Canada and the USA uncovered more records [12].

A consistent thread across many of these ‘special’ records is that, until seen and identified by an expert, they are just another record among the millions uploaded to the platform. Indeed, there are likely thousands of range shifts or extensions, new national records, rediscoveries, or newly introduced species that have been uploaded to iNaturalist but gone unnoticed due to a dearth, or even absence, of identifiers for particular taxa or regions.

iNaturalist is revolutionizing our understanding of biodiversity at multiple spatial and temporal scales, and across society. While we focus on individuals dedicating their own time identifying iNaturalist observations, we recognize that institutional support for experts to dedicate time to identify observations is an additional opportunity that would yield similar benefits. In the same vein, there exist barriers to the widespread use of iNaturalist globally (i.e., access to the internet or smartphones) that will need to be fully overcame to maximize the value of iNaturalist for biodiversity research in the future. Nevertheless, in the short term, we hope that you will consider contributing your expertise to iNaturalist — a time investment of 30 minutes per day, week, or month can provide substantial contributions to collectively improving our understanding of biodiversity. We conclude by offering an open invitation to all prospective identifiers to reach out to us on iNaturalist for any advice or guidance (see Table S1).