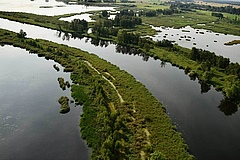 The research project "REWILD_DE - Conservation of biodiversity and valorisation of ecosystem services through rewilding - learning from the Oder Delta", funded by the German Federal Ministry of Education and Research (BMBF), started in November 2021. Scientists and practitioners are working together to explore the potential of rewilding for the restoration of biodiversity and the promotion of nature-based economic development in the model area of the Oder Delta in western Pomerania (north-eastern Germany). Furthermore, they will investigate to what extent the experiences and results gained during the project can be transferred beyond the project area and serve as a model for other regions. The project is coordinated at the Helmholtz Centre for Environmental Research (UFZ) with project 3 partners: the German Centre for Integrative Biodiversity Research (iDiv) at the Martin Luther University Halle-Wittenberg (MLU), the Eberswalde University for Sustainable Development (HNEE) and the association Rewilding Oder Delta (ROD), a practice partner in the study area.

The research project REWILD_DE takes up the concept of "rewilding" using the example of Oder Delta, the only rewilding area in Germany, and addresses the scientific and socio-economic questions as well as aspects of practical implementation. What opportunities does rewilding offer in various applications - e.g. river restoration, natural grazing approaches, coexistence with wildlife - for the conservation and restoration of biodiversity? Which ecosystem services in terms of regional economic and other societal benefits are provided or supported? How can rewilding strengthen the regional economic potential? And finally: What role can it play for biodiversity and nature conservation in Germany? The project aims to find substantiated answers to these questions and to develop practice-oriented solutions.

During the three-year project period, it will be analysed under which conditions biodiversity and ecosystem services can be valorised through rewilding, so that support from the affected stakeholders is generated in the region around the Stettin Lagoon. This instrumental perspective is to be complemented by the development of a "rewilding dialogue" with the local population. Creative approaches and methods of public relations are to be used to achieve an understanding of the guiding principles and to promote appreciation for the immaterial values of nature. The project will also recruit representatives of the key regional actors for a stakeholder advisory board that will accompany the project. Finally, the project partners will also examine the implementation of rewilding in the Oder Delta to be able to comprehensively assess the extent to which the concept is applicable for nature conservation in other areas of Germany.

Rewilding as a model

Halting biodiversity loss is a key challenge at the global, European and German levels. In this context, rewilding has increasingly gained traction in recent years as a particularly promising, participatory and process-oriented method of biodiversity and nature conservation. By re-allowing natural processes, promoting natural wildlife presence and density, and strongly involving local people and stakeholders, rewilding aims to strengthen the adaptive capacity of ecosystems in order to promote biodiversity and provide so-called ecosystem services. In doing so, economic use of the areas is not ruled out; on the contrary, great importance is attached to strengthening the regional natural economic potential and sustainable value creation. Rewilding also contributes significantly to achieving the goals of the current UN Decade for Ecosystem Restoration.

The concept of rewilding is being used more and more all over the world - in Europe it is supported in an exemplary way by the organisation "Rewilding Europe" in nine model areas. Since 2015, one of these has extended on both sides of the German-Polish border around the Stettin Lagoon: the Oder Delta. The first rewilding efforts began here back in 2012; since 2019, the newly founded Rewilding Oder Delta (ROD) association has been networking, bundling, and supplementing the activities of a wide range of partners, such as companies or start-ups, and working closely with the region's nature parks.

The project is being funded by the Federal Ministry of Education and Research (BMBF) within the framework of the Research Initiative for Conservation of Biodiversity (FEdA) over three years with a total of almost 2 million euros (funding code: 16LW0064K).