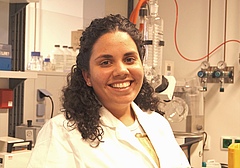 For the next 3 months, Arletys Verdecia-Mogena will join the MIE group as a guest researcher on a DAAD scholarship. Arletys is a junior researcher from the Centre for Genetic Engineering and Biotechnology (CIGB-Cuba), where she has been working on the Bioproducts for Agriculture Project for more than 2 years. She will join the project of Axel Touw to study how sink-manipulators affect glucosinolate allocation in Brassica. During her stay, she will study the expression of glucosinolate transporter, biosynthesis and activation genes in local and systemic tissues in response to belowground herbivory, and quantify the accumulation of glucosinolates in roots and leafs.